Budget 2022 includes proposals for various Canadian Immigration Programs: The budget 2022 includes various proposals on the Express Entry program, the TFWP as well as overall processing, and more. The Finance Minister of Canada, Chrystia Freeland just uncovered the very initial budget of Canada. This is noted after the September 2021 election happened in federal. The budget 2022 exists to highlight the government plans for Canada’s spending as well as revenue. It is quite an important announcement from the federal government every year. The major reason is its ability to highlight the economic and fiscal growth of Canada. Furthermore, the policies prioritize the government’s plans and focus even more.

The Budget 2022 outlines various priorities in the Canadian government’s plans when it comes to immigration.

The federal government offers to amend the IRPA to deliver the immigration minister with proper authority. This authorization will allow them to use Ministerial Regulations to assist select participants who meet the labor market needs perfectly. There isn’t any further information available from them. However, there is always a change of mind when it comes to the federal government.

To help support its activities to process and manage over 400,000 new residents permanently annually, Canada will set aside $2.1 billion. This will be set aside for five years as well as $317.6 million in proceeding funding.

With budget 2022, the government is investing about $29.3 million over three years to develop an employer model with a higher trust rate. This will help them to cut the warning triggers for the TWFP. This model is available for repetition of employees having the highest standards in working and living. Alongside that, factors like protections as well as wages in those also impact the choice. Further information is launching by the start of next year. Not to mention the federal government is also investing $48.2 million to develop a better TWFP for other sectors. These sectors are mainly the agricultural as well as the fishing employers and relevant areas. Moreover, it is also committing $64.6 million for three years to improve its capacity for processing job applications. All this is planned to be established with proper service standards. 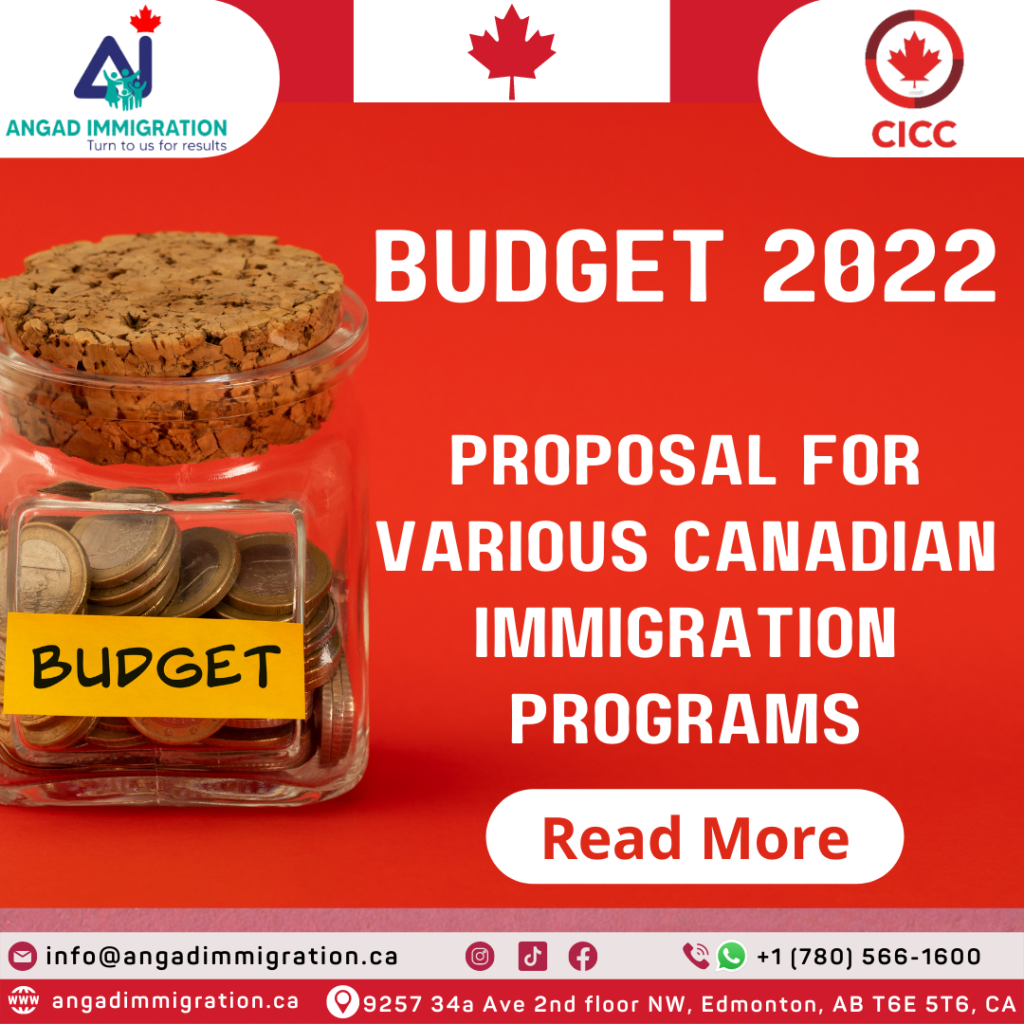 To facilitate higher levels of applications related to citizenship, the government is amending the Citizenship Act with the budget 2022. This will allow it to enable automation and machine-centered processing as well as a safe and secure collection of data.

Support Services For Visitors and Immigrants

The budget 2022 will spend $187.3 million for five years consecutively and $37.2 million for the IRCC to increase its responding abilities. This will improve the increasing number of inquiries and their responses. This way the IRCC is investing in the new technologies and software needed for better management of its clients. For immigration in Canada, this is a very plus point with all the new plans and methods.

The immigration announcement sometime consists of huge funding. For example, In 2014, The funding is drafted that Canada is investing millions for securing the express entry process would launch in January 2015.

The year 2021 came with a $485 million budget for Canada to modernize the overall system of immigration. Budget 2021 has five important pledges when it comes to immigration some of which are quite common. The funding on the other hand for the Temporary Residence to Permanent Residence pathway is also functional. It is the replacement of the overall GCMS which follows the immigration applicants.

In addition to that, the budget for 2021 outlined more spending on the TFWP. The increasing funds improve the compliance reviews of employers to prevent the mistreatment of workers. Furthermore, it will also support fragile foreign workers to allow them open work permits. Due to this, programs like Express entry in Canada and Canadian citizenship are not taken seriously by national employers. At last, the budget 2021 showcased further spending on progress to increase the employment of starter women.

Canada announced major new changes for the TFWP on April 4 LMIAs will now be effective for 2.5 years. The maximized time of employment for an increased wage of Global Talent workers is now from two to three years in aggregate. There is no longer a limit when it comes to lower-wage areas that employers in various industries can come within TFWP. Employers are able to have a team having about 30% foreign staff that depends on the industry. Canada hence no longer automatically rejects the LMIA applications for low-wage positions in the facilitation as well as food services. On the other hand, the retail trade sectors in regions with a rate of unemployment of about 6% and more.

In March, Canada showcased various measures to support Ukrainians leaving for the war. The Ukrainian citizens as well as their participants and children came to Canada for a temporary visa. The visa is called the Canada-Ukraine Authorization for Emergency Travel in simple. The visa allows the holders to reside in Canada for about three years in aggregate.

In February however, Canada announced an immigration level boost to support its economy after the pandemic. The immigration level plans for 2022 to 2024 need higher levels for the next three years. This way Canada expects to welcome about 431,645 permanent residents for budget 2022. Before the pandemic, it welcomed about 340,000 immigrations annually. However, nowadays it is focusing to welcome 451,000 by the year 2024. Finally, In January, Sean Fraser, the immigration minister announced the IRCC steps in detail. It also highlighted its processing levels as well as its challenges.

After the budget of 2022, the future step is set to elect officials to vote in Canada’s Parliament. If the majority of members of parliament are against the budget, then the election has proceeded. This is not likely to happen because the new Democratic Party already supported the new budget for 2022. Canadian immigration after the governing policies will be much improved in the future.

Angad Immigration delivers you the best immigration lawyers in Edmonton and in Canada.

We hope that you found this article about Budget 2022 including a proposal for various Canadian Immigration Programs informational.  If in case you have questions/queries related to any immigration program to Canada, please schedule an appointment with us. Our best immigration lawyers from Angad Immigration Canada will validate the profile as per the Immigration Program which is best suitable for you.