Through these programs, interested candidates can apply for PNPs and almost all Canadian provinces and territories except Quebec and Nunavut conduct their own PNP programs. Getting a provincial nomination can be helpful in getting Canadian permanent residence.

Moreover, The PNP program began in 1998 and since then the annual PNP candidates admissions have increased, currently, it accounts for around 105,000 permanent residency admissions annually.

In addition, the Federal and Provincial governments in Canada believe that PNP programs are an effective tool to grow urban centers in the country.

In this article we will check out the impact of NOC 2021 on PNP draws along with the (Prince Edward Island) PEI PNP draw and Manitoba Provincial Nominee Program draw results.

With the introduction of NOC 2021, provinces are adapting to the eligibility criteria with the system updated and are holding comparatively fewer draws so as to adapt to the new system for the PNP programs.

In recent times, IRCC has made some changes as per the latest National Occupation Classification NOC 2021 which applies to the  (Prince Edward Island) PEI PNP draw and Manitoba Provincial Nominee Program. Correspondingly, the province is updating their systems and adapting to the new eligibility criteria which are resulting in the slowing down of PNP draws.

Likewise, British Columbia until October 12, held weekly draws through the BC PNP. But due to the changes in the system, it has yet to resume PNP draws.

British Columbia has made huge changes in the last month to the allocation points system, the updates are similar to the Express Entry CRS system.

The noticeable fact is that the NOC system has removed the points. It has transformed into a TEER classification system. 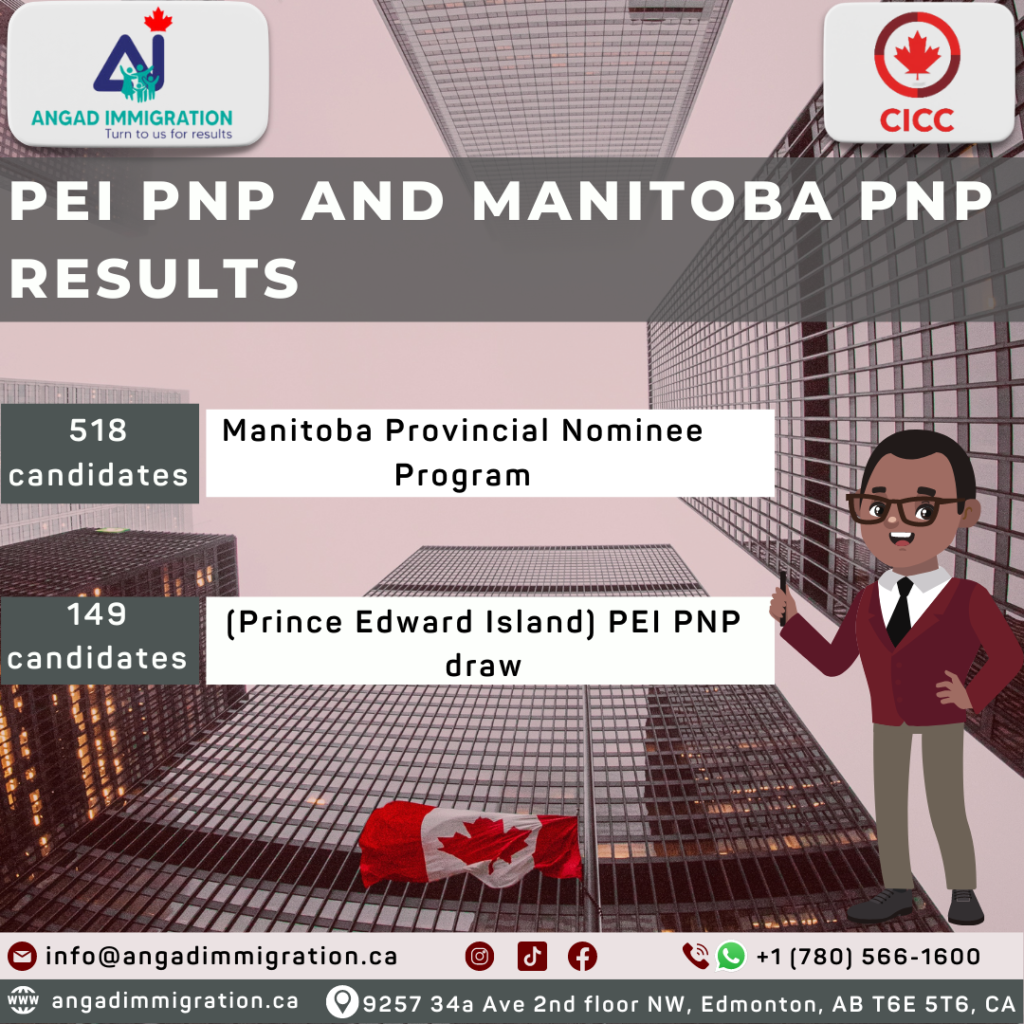 This has resulted in the increase of assigned points for economic factors (job offer, districts of employment, and income), and human capital (skills, individual competence, experience, and education).

Moreover, there are additional points for English and French language proficiency and professional designations.

Lastly, candidates will also get additional points for previous work experience studying outside of metropolitan Vancouver.

Below is the results for the (Prince Edward Island) PEI PNP draw and Manitoba Provincial Nominee Program draw. (November 11-18)

Manitoba Provincial Nominee Program invited 518 candidates in the recent draw. You need to meet the baseline criteria for the program you’re applying to. The total number of candidates invited by the province is as follows:

125 candidates out of the above-invited candidates had their Express Entry profiles for the Manitoba Provincial Nominee Program draw.

Manitoba will continue the processing of EOIs submitted before November 16 under the 2016 NOC, NOC 2021 will be used to evaluate any NOC received after or on November 16.

The PEI invites candidates with the highest rank for the monthly draw applications. Moreover, the PEI points grid is used to decide the score of (EOI) Expression of Interest profiles.

Angad Immigration helps you get the best lawyers for immigration in Canada and Edmonton.

If you are in need of a licensed Immigration Consultant to streamline your path to Canada and to represent your application- Click  HERE to schedule an appointment with us.

We hope this article about PEI PNP and Manitoba Provincial Nominee Program draw results was helpful to you. If you have any queries/questions related to the Canadian immigration programs, please schedule an appointment with us.

You’ll get the finest support and guidance from our best lawyers in Angad Immigration and they will make sure your profile gets validated as per the suitable immigration programs.