Updates for Ontario Provincial Nomination 2022 and BC 2022 draw This week through (PNP) Provincial Nomination Program, Ontario and British Columbia invited candidates and issued ITAs. Getting a provincial nomination can be the first step to getting permanent residence in Canada from (IRCC) Immigration, Refugees and Citizenship Canada.

Most provinces in Canada have their own PNP nominations and eligible candidates are invited through these PNP (Provincial Nominations Programs) programs in Canada.

Furthermore, the PNP (Provincial Nominations Program) was launched in 1998 since then it has significantly increased its prominence and accounts for more than 80,000 PR (Personal Residence) admissions every year.

Moreover, Provincial and Federal governments consider PNP programs the best way to improve the economic development of urban centers with the highest number of immigrants already living there.

Ontario Provincial Nomination 2022 invited 1,340 immigrants on September 29, from the Express Entry Skilled Trades Stream, besides candidates need a total score of 266 to be eligible for OINP.

Furthermore, in this stream all the applicants should have the following eligibility criteria:

You should be living in Ontario and need a minimum of 12 months of work experience- paid/full-time or paid/part-time experience for 1 year in skill trade in Ontario, listed in NOC (National Occupation Classification) Major Group 82, 72, or 73 or Minor Group 633, along with the obtained work experience within past 24 months.

In addition, you need to have a valid certificate or license from Ontario for your trade along with a Canadian Language Benchmark (CLB) score of 5 or more in French/English.

Likewise, Ontario is known to be the most populated province and aims to welcome the greatest number of immigrants every year. 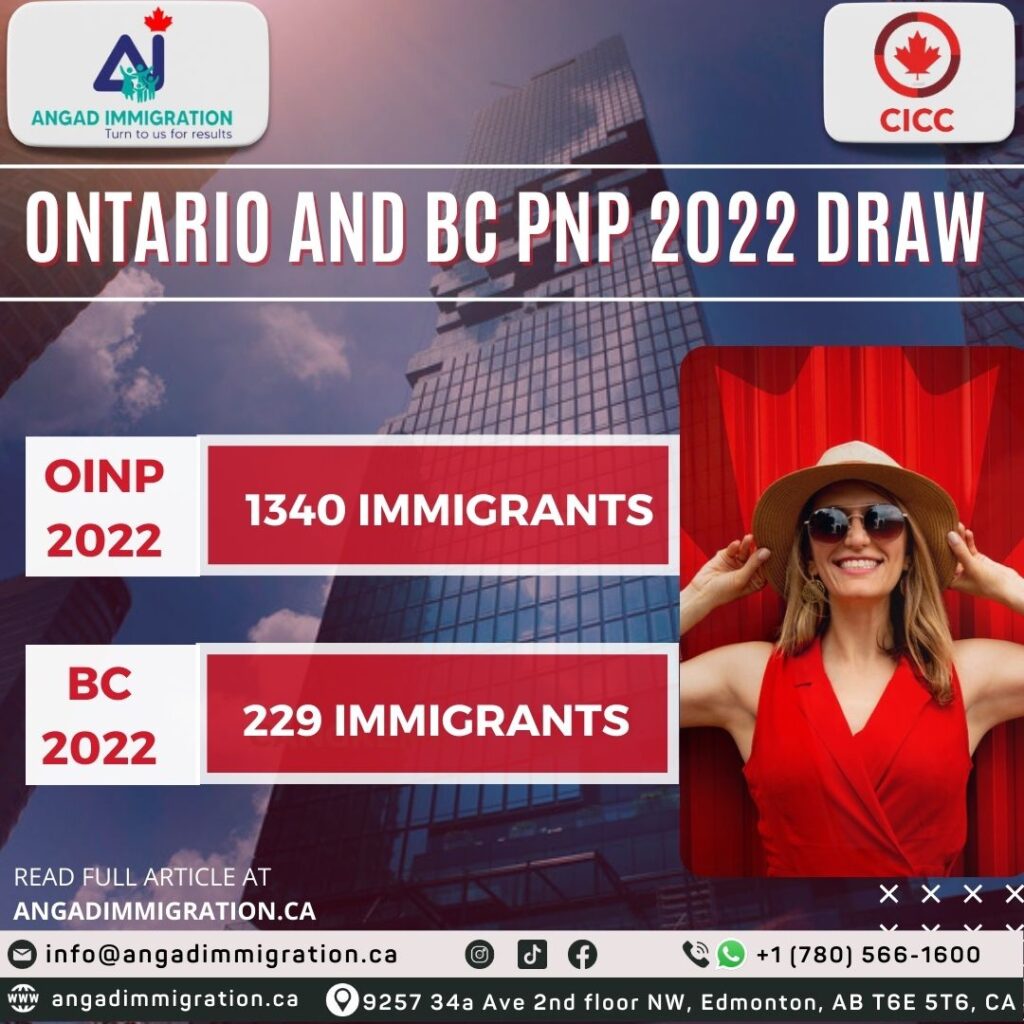 184 candidates were invited for tech occupations in the general draw. Candidates received invitations in the International Graduates and Skilled Workers categories along with candidates in the Express Entry.

Additionally, candidates had a SIRS score between 82 and 120 in the general draw. The applicants invited for the invitation rounds work in the occupations mentioned below:

These were the results for Ontario Provincial Nomination 2022 and British PNP programs.

As per the reports, this is October’s last draw and will remain paused till November 16 because of the transformations in the (NOC) National Occupation Classification and we will see an updated way for candidates’ skill level assessment in the economic immigration programs.

We hope that you found this article about the Updates for Ontario Provincial Nomination 2022 and BC 2022 draw informational. If in case you have questions/queries related to any immigration program to Canada, please schedule an appointment with us. Our best immigration lawyers from Angad Immigration Canada will validate the profile as per the Immigration Program which is best suitable for you.