The PNP (Provincial Nominations Programs) was launched in 1998 since then it has significantly increased its prominence and accounts for more than 80,000 PR (Personal Residence) admissions every year.

Moreover, the provincial and federal government considers PNP nominations to be beneficial for the economic development of Canada and this is why PNP admissions are increasing rapidly.

The results for Ontario and BC PNP programs are as follows, we recommend you to read them carefully:

Ontario invited 823 candidates on September 20 in the OINP Masters Graduate stream. To be eligible for OINP (Ontario Immigrant Nominee Program) programs you need a score of 33 or hire.

Furthermore, in this stream all the applicants should have the following eligibility criteria:

Ontario is known to be the most populated province and aims to welcome the greatest number of immigrants every year. This province has the highest ITAs allocations in Canada under the PNP. So for the year 2022, Ontario can issue 9,750 invitations.

Check detailed information on Why AAIP is the Best PNP Program For International Students? 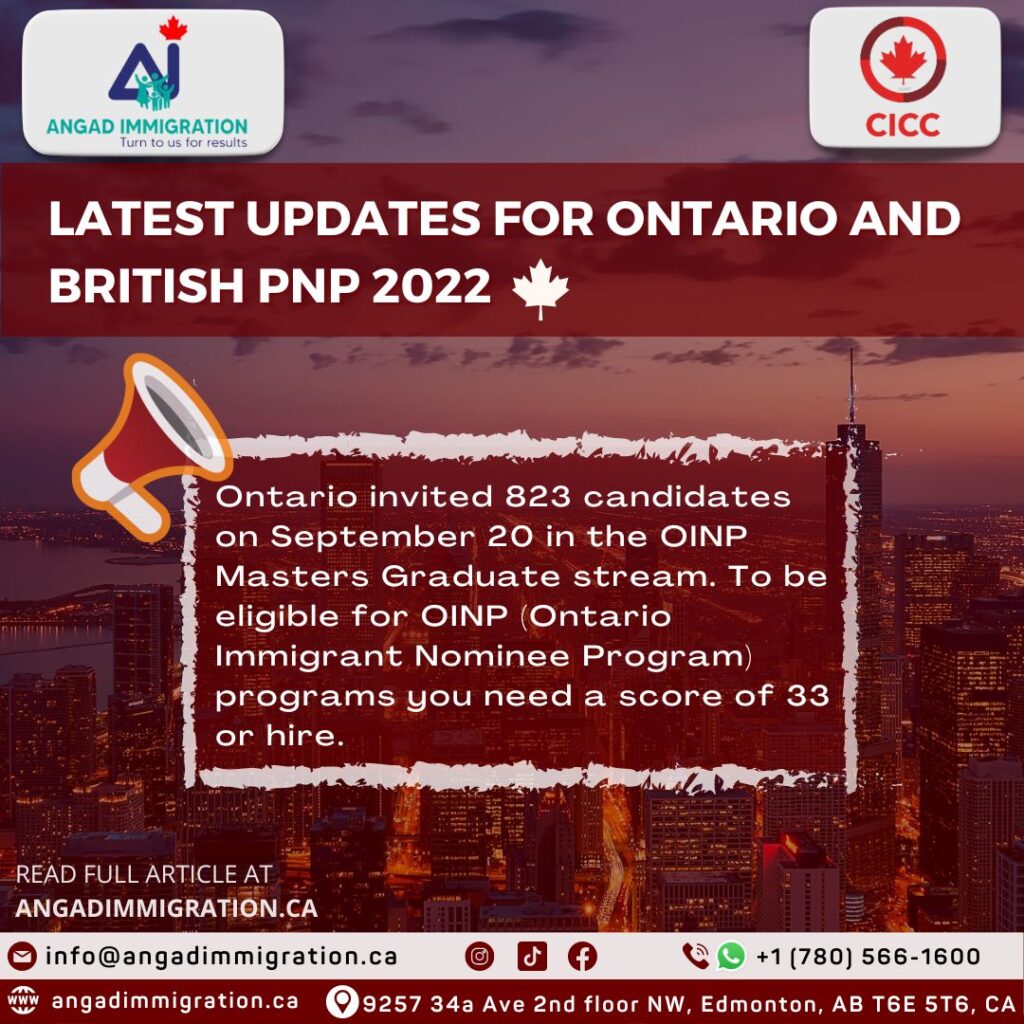 BC PNP programs invited over 352 candidates on September 21. (BC) British Columbia also conducts draws for provincial nomination every week.

In a tech occupation draw, British Columbia (BC) invited 341 candidates. It issued invitations to the applicants in the International Graduates and Skilled Worker categories including applicants in Express Entry. In addition, this draw also had Semi-Skilled and Entry Level candidates.

The Express Entry Skilled Worker minimum SIRS score was 91 points and 70 points for Semi-Skilled and Entry-level candidates for the regional draw. SIRS (Skills Immigration Registration System) is much similar to the CRS (Comprehensive Ranking System) score of Express Entry but only the British Columbia PNP program uses it.

In addition, BC (British Columbia) also invites applicants working in various occupations which are as follows:

We hope that you found this article about the Latest updates for Ontario and BC PNP programs 2022 in Canada informational. If in case you have questions/queries related to any immigration program to Canada, please schedule an appointment with us. Our best immigration lawyers from Angad Immigration Canada will validate the profile as per the Immigration Program which is best suitable for you.